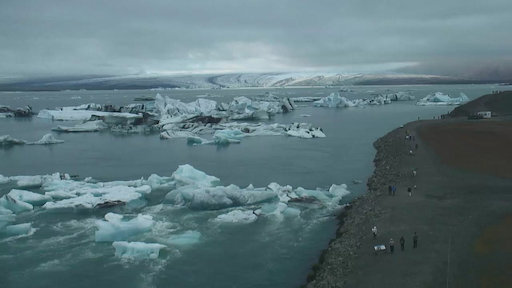 Mýrdalsjökull glacier in the south of Iceland. The icecap covers the notorious Katla volcano.

Mýrdalsjökull, Icelandic for "(the) mire dale glacier" is an ice cap in the south of Iceland. It is to the north of Vík í Mýrdal and to the east of the smaller ice cap Eyjafjallajökull. Between these two glaciers is Fimmvörðuháls pass. Its peak reaches 1,493 m (4,898 ft) in height and in the year 1980 it covered an area of approximately 595 km2 (230 sq mi).

The icecap of the glacier covers an active volcano called Katla. The caldera of the volcano has a diameter of 10 km (6 mi) and the volcano erupts usually every 40–80 years. The last eruption took place in 1918. Scientists are actively monitoring the volcano, particularly after the eruption of nearby Eyjafjallajökull began in April 2010. Since the year 930, 16 eruptions have been documented.